I don’t do much but function as the photographer, artist, and general recorder of things, occasionally fishing out a beer bottle, plastic trash bag, or even rooting out a tire or two from the cattails. As last year, I was a passenger in Tom (known as Toad) Starkweather’s dingy, The Toadtanic, featuring a 2 horsepower motor that threw up at the slightest contact with the pervasive weeds.

This year I tried something new: a new friend who buys for the Saugatuck Historical Museum in Saugatuck, Michigan, Judy A., gave me a lovely Arches 6″ x 10″ sketch pad called a Carnet de Voyage Travel Book. It’s 15, 140-lb. pages easily take watercolor sketches on both sides. Judy suggested I use an extra-fine sharpie to draw, which amazingly does not run, even when painted on top of.

I find I prefer to paint first and draw around the color shapes and then write on top of that, but on the river everything went by so fast that I drew first and painted afterwards. So far I’ve only painted two: one of the river and one of our friend Bill, who joined us for the first half-hour. Please note that I did these in a rocking boat! Those two big men plus me in the boat made quite a load, but there were places so shallow that I got out and pulled those two guys myself! 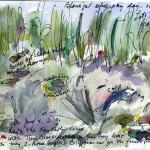