Starting in May and going through September, I will be working on the third and last poster in my Lake Effects posters. I don’t know whether I should say where this window is quite yet, but it is probably all right to let on that it’s in Michigan’s Upper Peninsula, looking south, which lends a slightly different perspective to the first two posters, which were painted from a west-facing window.

I am almost out of the first two posters—Lake Effect I and Lake Effect II—with fewer than an hundred each remaining. I thought that rather than go to a third printing (those that remain are of a second edition), I’d do a summer poster, something new and a little different. Lake Effects I covers October-December, and Lake Effects II January – April; Lake Effects III will celebrate May – October.

Here are two sample paintings I’ve done as an experiment, painted from photographs of the prospective view. The actual poster paintings, all small playing-card size, will be painted from life, not photographs. 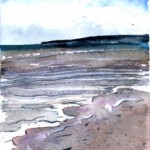